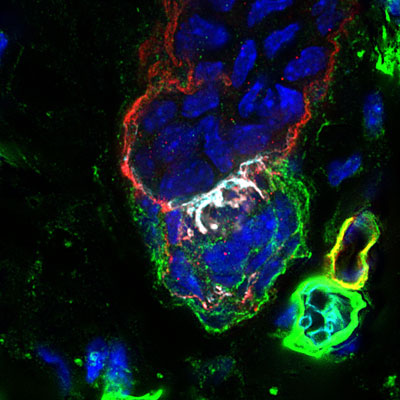 
In a discovery that could pave the way for therapies that promote wound healing and alleviate skin diseases, RIKEN researchers found that the network of molecules beneath the outermost layer of mouse skin, called the skin epithelium, is a highly specialized zone of biological activity that is distinct Interactions between different types of tissue1.

The extracellular matrix is ​​a complex scaffold made up of hundreds of regionally specialized proteins that perform multiple functions, including supporting and organizing cells in organs and transmitting biochemical signals that direct their growth and differentiation.

Nestled between the outer epithelium and the inner dermis, the basement membrane is a thin layer of extracellular matrix. “This critical interface in the skin is like an optimally formulated, intelligent adhesive,” explains Hironobu Fujiwara from the RIKEN Center for Biosystems Dynamics Research. But how it works in interactions between tissues is not well understood.

Fujiwara and his colleagues have now systematically characterized the cellular origins, molecular identities and distribution patterns of molecules in the basement membrane of the mouse skin with the help of gene expression analyzes and imaging methods. They discovered that there are a number of regionally specialized niches within this tissue interface, each of which is influenced by the identity of neighboring cells.

Things to know about copper peptides in skin care products