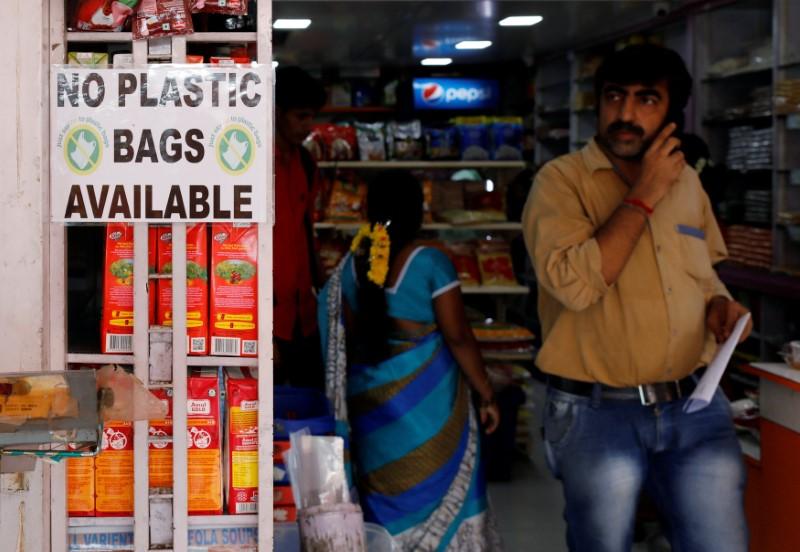 MUMBAI (Reuters) – Multinationals like Amazon Inc AMZN.O and H&M HMB.ST are pushing to ease a single-use plastic ban imposed by an Indian state last week, according to four sources familiar with the matter.

The ban by the state of Maharashtra, home to India’s financial capital, Mumbai, could dramatically increase costs for businesses that rely heavily on plastic for packaging, such as retailers, beverage makers and vendors. bottled water.

Maharashtra’s decision, the first such broad action against plastic by an Indian state, comes as Prime Minister Narendra Modi pushes a plan to completely end the use of single-use plastic in India by 2022.

Plastic packaging accounts for almost half of all plastic waste globally, and much of it is thrown away just minutes after it is first used, according to the United Nations.

Representatives of companies such as Amazon, H&M, Pepsi PEP.O and Coca-Cola KO.Nalong with plastics industry bodies and lobby groups, met with Maharashtra government officials days before the ban came into force on June 23, urging them to implement the rule by steps and to relax some standards, said the four sources who declined to be named.

“Our request to the government is: give the industry seven years to find alternatives,” said Neemit Punamiya, secretary general of the Plastic Bag Manufacturers Association of India, who attended the meeting. “It can’t happen overnight – we have investments, we have loans to pay and people to manage.”

The Federation of Indian Chambers of Commerce and Industry, whose members include online retailers such as Amazon India and Flipkart, said in a June 7 letter to the state government that such a ban “will not be not without its share of negative environmental impacts which are largely driven by the problems associated with the use of alternatives”.

The Internet and Mobile Association of India, which also counts Amazon and Flipkart among its members, said it had asked the state to relax the rules, but did not specify what relaxation it was seeking.

Beverage makers such as Pepsi and Coca-Cola, meanwhile, want an exemption from the rules because they impose a buyback of empty bottles at a guaranteed price, which will drive up costs, another source familiar with the talks said.

Amazon, Flipkart, Pepsi and Coca-Cola did not respond to requests for comment. H&M said in a statement it supports reuse and recycling, adding that the company has asked the government to clarify the rules and help find solutions.

Maharashtra’s environment minister said on Wednesday that the government would relax rules for neighborhood grocery stores allowing them to wrap produce such as rice and pulses in plastic. They should, however, ensure that buyers return packaging for recycling.

A senior state official told Reuters the government could also ease aspects of the rule for online retailers or give them more time to comply. Another official confirmed that the issues raised by the industry were being investigated.

The two officials declined to be named because the talks are not public.

For online retailers, cost is one of the main issues.

An e-commerce industry source said packaging costs account for about 2-3.5% of fulfillment costs – the price of shipping, delivery and compensating sellers for discounts – and that the use of biodegradable plastic or other alternatives could increase these costs.

Cardboard boxes, for example, could cost almost a third more than plastic packaging, according to industry estimates cited by the Economic Times daily.

Since the ban came into force, squads of officials in Mumbai have raided shops and restaurants, sometimes accompanied by police, to enforce the law.

Nidhi Choudhari, deputy municipal commissioner of Mumbai, told Reuters he had so far collected more than 1.3 million rupees in penalties.

Bharati Chaturvedi, founder of environmental advocacy group Chintan in New Delhi, said she feared the plastics industry would use any compliance extension to try to postpone the ban indefinitely.

“We really should have a firm ban,” she said.